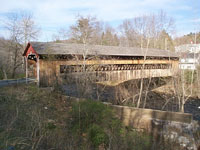 The Gilbertville Covered Bridge spans the Ware River and joins the Massachusetts towns of Ware and Hardwick (in Gilbertville village). The bridge also joins the Massachusetts Hampshire (Ware) and Worcester (Hardwick) counties. The bridge was built in 1886 and restored for its 100-year anniversary in 1986. It is one of three remaining indigenous covered bridges in Massachusetts (the Smith Bridge in Colrain and the Burkeville Bridge in Conway are the other surviving examples). The bridge is now closed to vehicle traffic, though it appears quite safe for pedestrian and cycling use. In 2003, some three hundred thousand dollars was provisioned by the U.S. Department of Transportation for restoration work. Some proposals have some of the bridge supports replaced with iron beams. These beams are certainly not part of the original bridge design, but would allow greater vehicle weights. In 2006, local news reported that the bridge has a severe powder post beetle problem. Officials are investigating extermination and prevention techniques. It does not appear that reconstruction or repairs have yet commenced as of this writing (March 2007). Note: It appears that the map data is incomplete in this region. The Ware River runs under the Gilbertville Covered Bridge and follows Route 32 into the center of Ware, Massachusetts. This spot was updated about 1 year ago by Aron Atkins. Created by Aron Atkins about 1 year ago. http://www.spotstory.com/spots/show/64 Address: Bridge Street Year Built: 1886 Truss Type: Town Portal Width: 20 feet Length: 137 feet Spans: Ware River Notes: The Gilbertville Bridge, on the Ware-Hardwick town line, features metal reinforcements and a sharp, three-toned color scheme; portsides stained red and white while the longsides are left a natural color. Unfortunately, the bridge suffers some graffiti. It has a six ton capacity and is open to vehicular traffic. http://www.masscoveredbridges.net/main/gilbertville.html Public comment on covered bridge due
HARDWICK — Public comment on the 75 percent design of the historic wooden covered bridge traversing Hardwick and Ware is due by Monday, according to a state Highway Department document.

A copy of the 75 percent design plan, prepared by Fay, Spofford & Thorndike of Burlington, is displayed at the municipal building in Gilbertville. The bridge, built in 1887, runs along Old Gilbertville Road in Ware and Bridge Street in the Gilbertville section of Hardwick. It has been closed to vehicle traffic since 2002, when state officials deemed the bridge unsafe. The 137.5-foot span crosses Ware River — connecting Worcester and Hampshire counties — and Hardwick with Ware.

State officials have estimated repair costs at $1.5 million to $2.3 million, which would be paid by state and federal funds. Comments should be sent to the Massachusetts Highway Department, re: Gilbertville Covered Bridge-Hardwick/Ware; 10 Park Plaza, Boston, MA 02116-3969. Questions may be directed to Shawn Holland, state Highway Project Management Engineer, at (617) 973-7242. http://www.telegram.com/article/20070727/DIGESTS/707270530/1004/RSS01&source=rss Bridge repairs

HARDWICK— The covered bridge spanning the Ware River between Hardwick and Ware that was closed for safety reasons nearly eight years ago will not be fixed before 2013 because there is no government money for the $2.3 million repair project, according to state Highway Commissioner Lusia Paiewonsky.

At a public hearing in June 2006 in Ware, state highway officials said work on the 137.5-foot wooden bridge could start in the fall of 2008.

Built in 1887, the bridge sits along Old Gilbertville Road in Ware and Bridge Street in the Gilbertville section of Hardwick.
“The Gilbertville Bridge rehabilitation project is currently not scheduled to be advertised until October 2013 due to the limited funding available,” Ms. Paiewonsky wrote in a Jan. 15 letter to state Sen. Stephen M. Brewer, D-Barre. Hardwick selectmen released the letter during their meeting Tuesday night.

“Until this project is awarded for construction, the towns remain responsible for maintenance of this bridge,” the commissioner wrote.

State and federal funds have been promised to underwrite all of the repair costs
State officials asked the towns to close the bridge in August 2002, saying it was not safe for vehicular traffic.
the Ware/Hardwick Joint Covered Bridge Committee was formed to monitor, coordinate and advise the Selectmen of each town on the progress of repairs and renovations to the Ware/Hardwick Covered Bridge.